Wales is known for its castles and stone cottages, but it’s also a land of contemporary architecture. Visitors will find sleek, stylish buildings designed by talented – and well-known architects – in urban areas, heritage attractions and even National Parks. 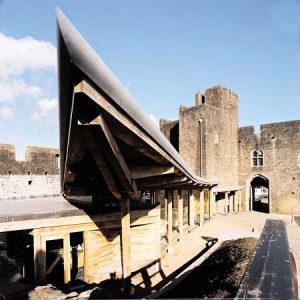 Blending modern with ancient, the Caerphilly Castle Visitor Centre was designed by Davies Sutton Architecture. Their goal when designing this modern building was to make it sympathetic to its surroundings but still a structure “of this era.”

Welsh slate was used for the flooring and steel/lead for the roofs – a common feature in old castles. The pointed roof, a striking feature, rises up as if it were attacking the Gatehouse itself. The building faces south to maximize solar energy, and the adjoining moat’s thermal mass greatly reduces energy consumption.

According to Davies Sutton, the design is a blend of traditional and modern. Traditional materials were used to honor the past, but modern construction methods were employed.

New additions to the Arts Centre, created by Heatherwick Studio, include artists’ studios with walls adorned with crumped steel. 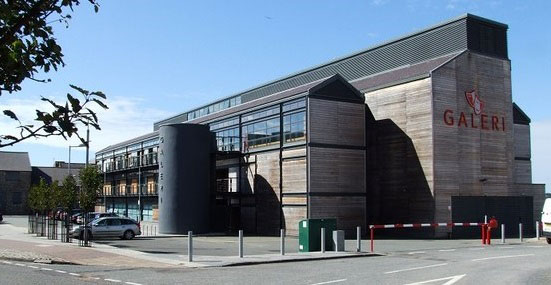 The idea for Galeri Caenarfon was conceived in 1995 by Richard Murphy Architects as part of its regeneration programme. In 2005, it opened next to Victoria Dock.

The exterior of the building features a striking steel frame that gives the structure a warehouse vibe. Green oak boarding softens the wasteland feel, while the soft interiors make visitors feel at home.

Using advanced technology, Cardiff’s Central Library Hub was designed with sustainability in mind. Designed by BDP Architects and inspired by book spines, the building’s exterior features a combination of metal and glass panels.

The building was opened by Manic Street Preachers and was made to serve as a venue for a wide range of events.

Designed by Normal Foster and Partners, the Great Glass House opened in 2000 at the National Botanic Garden and was the largest in the world.

Made of granite and glass, the Hafod Eyri-Snowdon Summit Building blends in with its surroundings. Shaped like a weaver’s shuttle, the building is nestled in the summit of Snowdon.

The stone used to construct the building was sourced from Blaenau Ffestiniog.

The building, completed in 2009, also serves as a terminus for the Snowdon Mountain Railway, a café for hikers and a visitor’s centre.

Only parts of the building are open to the public, but you can take a virtual tour of the Senedd on the National Assembly’s website. 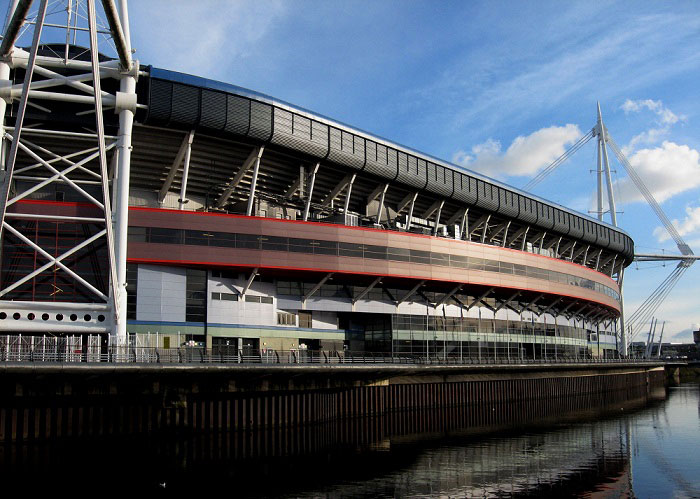 Welsh rugby fans agree – the Principality Stadium was worth the £121 million it cost to build. In between matches, fans can visit the stadium and take a tour, where guides lead you through the rugby team’s dressing room, the Dragon’s Lair, down the tunnel and onto the pitch itself.

Designed by Jonathan Adams of Percy Thomas Architects, the Wales Millennium Centre has a striking design that is impossible to miss. The building may have only been completed in 2009, but it’s already an icon of contemporary design in Wales.

Some say the design is too stereotypical due to the use of steel, copper, stone and calligraphy. But most find the building to be distinctly Welsh.

The Ruthin Craft Centre was designed by Sergison Bates Architect and features an unmistakable zinc roofline. The building features tasteful lighting and exhibition space design along with a café and workshops. The courtyard terrace and terracotta-coloured stone add to the unique design of the centre.